Lots going on in WallaVille. We know you have lots going on, so we’ll try and make this brief. Enjoy!

We’ve made some optimizations to various areas of the app’s backend code, which should speed up various aspects of the app. Due to the higher amount of in-game activity within the past few days, players may experience a tad more latency when foraging, interacting with places, or mixing. This is being handled by our development team at the moment with the goal of having the least amount of load time as possible. However, we are a worldwide game, so some load time is to be expected from time to time.

The new Wishing Well item and game mechanic was added to WallaBee on Wednesday, with just over 200k items used for wishes within the first 24 hours. Thank you for experimenting with this new portion of the game. We hope that you find it as an enjoyable alternative to recycling junk items. As of today, we have removed the ability for Player Uniques to be offered to the Wishing Well. This decision was reached after 48 hours of hard thought, wrestling with whether or not it was the right decision moving forward for the game and community. Although we cannot go back in time to alter how the first few Wells were charged, we can learn from history and move forward in the right direction. We realize that this will go over well with some players and not so well with others, but that is our decision to make regarding what we believe is best moving forward. There are other great alternatives to using Player Uniques if you’re clever enough to find them (some have been shared in the forums). We’ve made a few changes to item pricing to help accommodate this sudden change.

Today is National Donut Day in the States, so Donuts have been added to the store and all foragable places for a limited time.

We’re nearly at the end of The Chase. Last we saw, there was a run-in with a marching band and an attempted escape with some nearby stairs. What will happen next? Only time will tell.

We have adjusted the categorization of various Uniques from ‘Player’ to ‘WallaBee.’ These include Boots & Cats and the entire Santa Hat family of items. The ordering of these Uniques within the Market will be slightly adjusted to reflect this change, with them showing closer to the top than other Player Uniques.

With more and more Player Uniques coming out, we want to spend a respectable amount of time learning more about them. Our Player Unique Spotlight this week highlighted Enjoy Life. You can read more about this unique here. 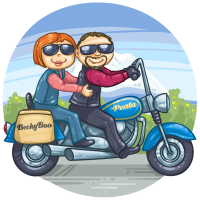 This Week In WallaBee History | May 28th – June 3rd

May 28th, 2014: Loving Hut was released as a foragable Unique at select Loving Hut stores across the globe. As of V2, there have been issues with this item being available at these locations, but as of today, they can be found at every one yet again.

May 31st, 2013: We took a trip to the theater and grabbed a Programme as we entered the establishment. Shhh… The set is about to begin.

June 1st, 2016: First Degree Burn released as the first item in SUPER YOTE. We’re working on something for you at the moment, Yote. Just you wait.

June 3rd, 2012: The first four Uniques were released: Wallamu Arena, Unicorn, Killer Whale, and WallaBee. All but one of these have been made available for all players to collect. Do you know which one it is?