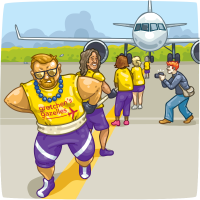 Pulling for a Cure

How To Get: It is only offered through April 30, 2018. Please visit my profile for more information.

Meaning: This unique was created to help me raise funds for the American Cancer Society (ACS) Relay for Life event that I will participate in on May 4, 2018. Pulling for a cure pitted teams of 20 humans vs a 757-200 jet plane weighing in around 150k pounds. The goal is to pull the plane 20 feet in the shortest amount of time. This event, hosted by Delta airlines, celebrates the fundraising efforts of their employees. The past 2 years they have also invited a small team of Medallion passengers to participate as well. This group, Medallions for Global Good, participates in many Delta charity drives throughout the year, helping to raise funds from the seats! Last year our team was the top fundraiser for the event at $128K and number 9 in the nation for all of ACS Relay events. The Jet Drag itself raised over $500k between all 110 teams. The artwork is based on a couple of photos sent to Andy. Some of you have recognized KennyG as the dark haired guy. Yes, he actually came to the event and was two people behind me on the rope. Jane met KennyG while working a flight after telling him her story, he played a mini concert in the aisle of the plane and promised to come to pull with us.

Which number unique is this for you? This is my 6th

Closing Thoughts: Cancer is a terrible disease and so many are touched by it. All the money is collected directly into the ACS application and goes towards research for a cure. In addition to funding research grants, donations also pay for rides for cancer patients, lodging for families, support and assistance for patients working through appearance changes caused by treatment, education and outreach. As a result of these efforts, there has been a 25% drop in mortality rates over the past 20 years. Our team, called Gretchen’s Gazelles, pulls to honor our Flight attendant sponsor Jane’s daughter, Gretchen. Gretchen was taken away from her family by brain cancer in 2015. Her two small daughters join their grandma in cheering us on at the event. Thank you so much for your support. May this be the year we find the cure.