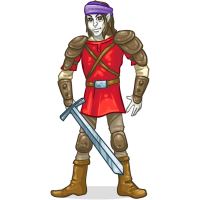 The half-elven former lover of Anastasia, found true happiness in Indigo.
His elf blood allowing him to live longer than humans, he is likely to live long enough for Indigo to get bored.

Meaning: At the time I had just got back together with my boyfriend who and I wanted to be able to give him number 2 of the card as he knew how much I love Wallabee! I also wanted to expand Tavern of the Damned series.

Which number Unique is this for you? This is my fifth Unique.

Closing Thoughts: Part of the Tavern of the Damned series. Samin is husband to Indigo. Also, a roleplay character, who was developed by my ex. I wanted to represent the main aspects of the role-playing part of my life.