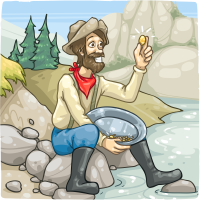 Not all those who wander are lost. Eureka! Let’s go see what we can find.

How To Get: Sheldon is free for the asking, to those who do not have one.

Meaning: Sheldon was created as an extension to the Gold Rush set from last year. That set highlighted Sheldon’s journey from New York to the gold fields of California in 1849. After surviving train bandits, buffalo stampedes, a scare from a huge grizzly bear and claim jumpers, he finally made his fortune, with the help of his new friend, Sierra the Grizzly Bear. He definitely deserved a Unique! The history of the California Gold Rush is a story that fascinates me, and Sheldon represents all those courageous gold-seekers who gave up everything to head to California to search for gold. Keep your eyes open, Sheldon’s story isn’t over.

Which number Unique is this for you? Sheldon was my first Unique.

Closing Thoughts: I love Uniques. They add such a personal touch to WallaBee, as most have a personal meaning and story behind them. Collecting them and creating them is my favorite aspect of the game.

We know that everyone can’t make it to WallaBoo! Bash this weekend, so we wanted to spread the love worldwide and offer a 10% discount in the Freeze Tag Online Store! The sale will run from Friday at 15:00 MHQ until Sunday at 12:00 MHQ. Just input the code “MHBOOBASH” at checkout to receive the 10% discount.

The discount code will apply to your whole order and you can use it as many times as you like throughout the weekend. Please note that you MUST use the code to receive the discount. We will not refund any purchases simply because they forgot to include the discount code.

We want the whole world to celebrate WallaBoo! Bash with us, even if you can’t make it to McKinney, TX! So get ready for a creepy set of items dropping this weekend. These items will release like normal, so have your phone near you at all hours of the day. Trick or Tree! 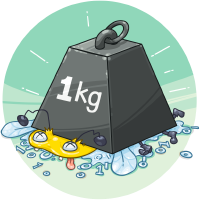 Kilo (from Greek χίλιοι), prefix denoting 1000 in the metric system… but whatevs, enough with the science. 1000 is a pretty darn cool number, okay?

How To Get: It’s been retired, so eh, it’s a little tricky.

Meaning: Kilo is the second item in my mini-series of binary bees. This time I chose to focus on my main number, #1000. It was mainly used to trade for some of my last missing binary set items, of which none was actually a #1000. Very ironic.

Which number Unique is this for you? 2 out of 2 (so far at least)

Closing Thoughts: Ouch, that poor little bug. Will he survive the pressure? Only time will tell.

Let’s begin by addressing the elephant in the room: The Weekly Buzz. We have decided to put a brief pause on this series until we have more exciting things to share with the community on a weekly basis. Instead, you can look forward to more ‘announcement’ type posts when gameplay changes happen. Unique Spotlight posts will continue as normal until there are no more stories to share, at which point we will transition into a new series to showcase artwork and behind-the-scenes happenings… which leads us to the topic of today’s announcement.

Shiny Mixers were first introduced into WallaBee on April 21st, 2016, as a fundraiser-type item to help raise money for new developers. Well, it was a success, and we finished building V2 of WallaBee. Shiny Mixers were removed and added back into the store many times, for special events, allowing players to stock up within a controlled timeframe. Since then, Golden Mixers were given a recipe for creating outside of these special time periods, by mixing certain golden items together. This has been one of many fun ways for collectors to pass the time between drops (and earn some extra ‘comb)! Unfortunately, the trends in Golden Mixers Market prices have done more harm to the game’s economy than good. With that being said, we believe that making an adjustment to the recipe is necessary to reinstate the rareness and power that Golden Mixers have. We will be removing the recipes for Midas Touch items to create Golden Mixers on November 1st, 2pm UTC. For the time being, Shiny Mixers will only be available as possible rewards from fully charged Wishing Wells.

Various Sets have been updated to have more consistent cost to complete, based on the size of the set. We have begun this process with sets originally released more than 3 years ago, and plan to begin spreading it to newer sets soon. Why make this change? Sets used to have a very wide (and random) cost to complete… with some sets costing over 50k to complete. This makes it difficult to plan ahead and ensure you’ve gathered enough honeycombs to last the whole set. Since the number of items needed to complete a set varies from two to fifty-one (Eau de WallaBee and One Set To Rule Them All), we’ve broken this new pricing into four simple categories.

There are a few sets that will unfortunately break this model (Crazy Chicks’ Easter Hen), but we will do our best to keep it fair with a higher reward for those anomalies. Some items within a set are found through foraging, but will still be given a value toward completing the set… which means you may save some honeycombs on the cost of completing a set. We believe these changes will help all of our collectors keep buzzing towards completing sets.

Grab Bags had unintentionally seen a hiatus from being released, but are back with new Walllagraphics to collect. Previously released Grab Bags will see an adjustment in pricing very soon to reflect the update to set completion pricing. We hope that the updated costs will help collectors enjoy these special items even more. Adjustments to where these can be foraged will also take place soon.

Mega Mixes have been in the game for a long time, some having crazy recipes to create! However, Mega Mixes with multiple of the same type of item were adjusted with V2 to accommodate the backend changes. The recipe to create a Solved Puzzle Cube with 26 Unbranded Puzzle Cubes is one of the Mega Mixes that was previously adjusted, but no more! Due to a recent discovery by Dr Miu Chudoku, some older Mega Mix recipes have been added back into the game! Check out the new (old) recipes for Solved Puzzle Cube, Bottle Rocket, and 100c Coin. Now that items can be created using multiple of the same type, keep your eyes and pouches peeled…

Item Locks have been used to protect unsaved items for years… but this is one annoying currency that can’t be traded. Mystery Boxes and Christmas Mixers have helped players get locks without paying real money, but even these fall short due to their random nature. In the next few months, we aim on adding a way for locks to be easily transferred between players. Details on the specifics will be shared at a later date. For now, enjoy a small sale on Item Locks this weekend. 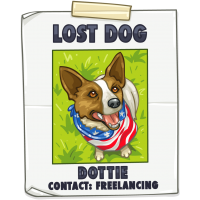 My Red Heeler vanished from our fenced yard in 2011. See www.bringdottiehome.com for details.

How To Get: Players can acquire it by providing three palindrome upgrades for non palindrome set cards. From time to time it will appear in the market when I need honeycombs.

Meaning: This Unique is in remembrance of a friend’s lost dog who never returned home – it’s like a wanted poster.

Which number Unique is this for you? This is my only Unique. 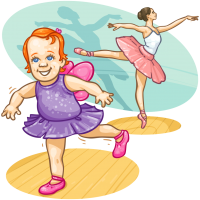 You, my gorgeous girl, can be ANYTHING you want to be. Even if that’s a fairy ballerina 💕

How To Get: Just ask (with manners!)

Meaning: It’s based on a video of my eldest daughter, who at the age of 2 wanted to be a fairy ballerina. I want my girls to know they can be anything they want too be when they grow up! There is no limits!!!

Which number Unique is this for you? This is my first Unique.

Are you coming to WallaBoo! this year? Although registration is now closed, we wanted to remind you to bring your passports to the event, as special stickers will be given out FOR FREE to those in attendance with a passport. If you don’t have a passport, you will be able to purchase one at the event! Extra stickers may be made available through the online store for players unable to attend the event, quantity pending.

Speaking of stickers, if you want to purchase stickers of your personalized WallaBoo! Unique, you can order them using the PLAYER UNIQUE STICKERS option on the online store. Simply let us know in the notes that you’d like your WallaBoo! Unique ordered for pickup at the event, and we will have them ready upon registration checkin.

Should you have any questions, please let us know by emailing support@wallabeegame.com 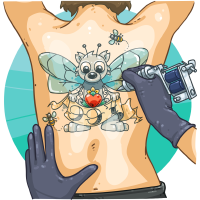 Word on the street is that you have to get a real WallaBee Tattoo if you want to earn this Unique. Don’t worry… it’ll only sting a bit!

How To Get: Wallatats are free for all! Just send JenBee997 an in-game message to request one! Despite the item description I promise it will be pain-free!

Meaning: Tattoos have continually been a big part of my life and my family’s life over the years. I’ve always been fascinated by the striking beauty of body art. So naturally I knew I wanted to create a tattoo Unique, although I wasn’t quite sure what kind of tattoo I wanted. But then Andrew Cameron came to the rescue! When I first saw this beautiful tattoo artwork he had created I was over the moon! What an amazing way to honor my two favorite things: WallaBee & Tats!

Which number Unique is this for you? This was my very first Unique and is so special to me. I have been an avid WallaBee player since 2015 and was super excited when Unique commissions were re-opened in 2016 which lead to the creation of the Wallatat. I have special plans for another Unique in 2018 so keep your eyes peeled!

Closing Thoughts: Players often ask me if I have a real WallaBee tattoo. I’ve gotten about 20 tattoos during my life so far and I love every single one of them! But my favorite is my foraging bee tattoo! Unfortunately when you tap it no honeycombs come out!