Speaking of forum updates, we have also added access to them through our website! Set up trades and auctions with ease, quickly access other players’ profiles to view their wishlists, and chat with players from all over the world, all from the comfort of your computer. Players will also be able to quickly tell who is Staff or a BeeKeeper with helpful labels. Judy put in a ton of work on this great addition, so make sure to drop @JudyPop some love if you enjoy them! 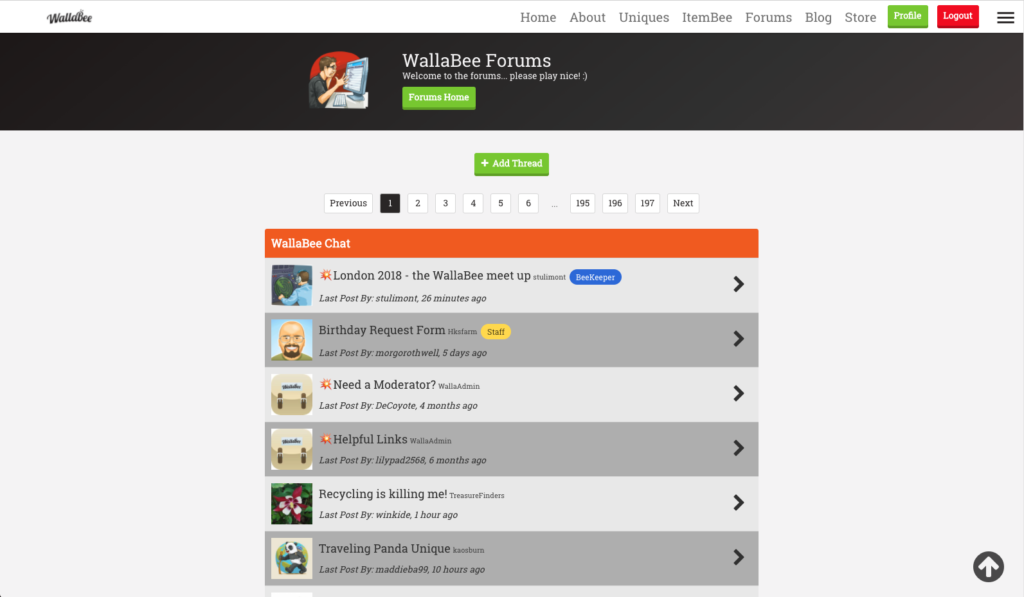 Any additional questions, comments, concerns? Email: support@wallabeegame.com
If the App Store doesn’t show an update for you, please use the links above. If the forums are not showing correctly, browsing cache may need to be cleared.

To help commemorate the weekend festivities, we have a special unique coming out during WallaBash on Saturday.We appreciate all of your support, whether near or far. This unique will be released through the store for 1hc at 8pm UTC (3pm local WHQ time). The artwork for this item will be a surprise until it comes out, to keep everyone on their toes as much as possible.

There may also be a specific in-game thank you (not an item) for those attending WallaBash. -wink wink-

In other news, we are still working diligently to get the freezing issue under wraps. We hope to have a fix out as soon as possible, so keep an eye out for our future blog posts.

Additionally, we will be out of the of the office on Monday, so we will be returning emails beginning Tuesday. If you have any questions, please email support@wallabeegame.com

Hello everyone! We wanted to give all of our players an update about what’s happening this weekend at MHQ Bash. We are paying homage to one of the main influences in WallaBee’s creation: GoWalla.

We are going to be selling physical WallaBee Passports at MHQ Bash for all attendees. These passports will allow players to interact with the weekend festivities in an additional way: stickers. We have created stickers for every event this weekend, including meeting Andy. These will be limited edition stickers, with the idea of creating more in the future to help fill your passports. The passport also has blank pages toward the back for getting autographs from your favorite WallaBee Players and Staff.

These passports will also be available after MHQ Bash on our webstore while supplies last.

Additionally, we have added a new physical coin to Munzee’s arsenal, which is in the shape of a WallaBee honeycomb. This is trackable in Munzee and a great addition to any WallaBee Player’s collection. These coinz will be for sale at MHQ Bash this weekend and will be available through the online store later next week.

For more information about GoWalla, you can read up on their history by looking at their wiki (or ask many legacy WallaBee players).

There’s a new update in the App Store and Google Play Store: Update 2.1.5.

WallaBee 2.1.5 makes some needed updates/bug fixes and reintroduces achievements back into the game with new challenges and beautiful badges.

Any additional questions, comments, concerns? Email: support@wallabeegame.com
If the App Store doesn’t show an update for you, please use the links above.

The first reason we removed Version 1 (V1) achievements is due to the technology WallaBee uses. The old achievement system needed to be overhauled for our new infrastructure, so it only made sense to completely overhaul it. We also don’t track all of the same data in V2 that we did in V1, so showing unachievable achievements for new players doesn’t make for a great experience. However, players will see some similar tasks to complete, with new updated artwork.

The second reason we removed V1 achievements is that they were created for a smaller audience/game in mind. Many of the achievements could be finished within one day (outside of the anniversary/birthday achievements). For example, the ‘Collector’ achievements required players to save 1, 25, and 100 items. This can be done now with a single visit to the Helicarrier, so there’s little to achieve with that badge line. Similarly, we no longer have Twitter and Facebook integration in V2, so the ‘Sharer’ achievements would be unachievable for new players, leaving a hole in their achievements page. Having a new series of achievements allows us to be methodical with when, how, and why we add new achievements in the future.

The third reason we removed V1 achievements is for an overall consistency moving forward with the gameplay and art style of WallaBee. As mentioned above, we’re looking at new data, which means that new types of achievements are available to earn. These new achievements can include how many items players have recycled and how many places, within certain place categories, you’ve interacted with. This allows us to continue adding new achievements based on gameplay you’re already doing as of V2. We also felt that the V1 achievements could use a pick-me-up with their visuals, which helped lead us to the new V2 achievements. You will find that the artwork compliments the overall theme of WallaBee, yet has a distinct style. This was done purposefully to make achievements stand out as their own without detracting from item artwork. Compliments of our very own, John Rogeles (JohnArt).

Achievements will be separated into various categories, including but not limited to, Honeycomb-related and Place-related achievements. Inside these categories, players will notice that challenges are separated into ‘Lifetime’ tasks, which are a running total of activities beginning May 1st, 2017, and ‘Daily’ tasks, which need to be completed within one day (based on UTC time). Lifetime achievements are denoted with a blue banner upon completion, while Daily achievements’ banners are green. Please note that Daily achievements are not repeatable – you can only earn that achievement once. It is not an achievement you must repeat daily, but simply an achievement that needs all requirements to be completed within a UTC day.

Q: Will achievements be retroactive?
A: Some achievements will be retroactive to May 1st, 2017, the day V2 was released. We will be using the launch date of Version 2 for any retroactive achievements moving forward, as that was the day we released the new API to the public. This makes a more fair playing ground for all players in V2, as well as something new for legacy players to earn!

Q: I’m a legacy player from V1. Do I get to keep my V1 achievements?
A: The short answer is no. However, we will be introducing a Retro Bee achievement for all of our old-school players. It’s a special thank you for being with us since V1. If you would like a download of which achievements you earned in V1, we can sort that out via support.

Q: Where are my birthday/anniversary achievements?
A: They will be added at a later date. These are the only achievements that will be retroactive prior to May 1st, 2017.

Q: I performed the tasks necessary to earn an achievement, but my progress bar/achievement didn’t update.
A: Don’t worry, it will appear shortly. All tasks for achievements are cached, so once those are updated, the progress bar will update as well. This is the same for unlocking an achievement. It doesn’t happen immediately, but will happen within a few minutes.

Q: I unlocked an achievement, but never got notified.
A: We send push notifications when you earn an achievement, but you have to be out of the app to receive them. We will also be backfilling activity posts and inbox notifications once the majority of players have updated to 2.1.5 to avoid any unforeseen issues. So right after updating, you will not see any activity posts for completing achievements, but they will be there later this week.

The great thing about WallaBee is that it’s played by users all around the world. The terrible thing about WallaBee is that drop times cannot be fair across the board. This fact has been reinforced recently in the last 10+ drops. After our app’s freakout on a weekend, WallaBee’s President decided it would be best to have item releases during WHQ office hours, just in case there was an issue. There was a ten-consecutive-item-releases-without-issues mandate put into place, beginning with the Latest Bot release. We have just recently successfully gotten past that number, so items will once again return to a more random release timeframe. Since we have had so many recent releases with a timeframe that favor’s USA and Europe, we have been trying to balance that scale a bit for our friends in other areas of the world (Hello, Down Under!) with the last two week’s item releases. We will continue to push forward with a more worldwide focus for drop times now that things are running smoother.

A new set has appeared over the weekend: Joshua Tree. This is a BeeKeeper directed set, through the eyes of Cali49. As a California local, Cali49 has spent many hours traversing the desert wilderness that is Joshua Tree National Park. This six item set is based on his favorite landmarks and sights. Cali49 is getting this opportunity to co-direct a set based on last year’s BeeKeeper competition, where three BeeKeepers won the ability to co-direct a set with myself and Andy. Lightek’s ‘The Hunt’ was the first BeeKeeper set, which highlighted the 5th year birthday celebration in London, ‘Joshua Tree’ is the second BeeKeeper set, and a third is coming soon… We hope that you enjoy a trip through one of California’s National Parks with us.

Updates for WallaBee have slowed down a bit to some changes internally, but we are back on track with fixing bugs and app improvements. One improvement that you can already see in the app deals with the Helicarrier and the WallaBee Museum. These two locations now automatically sort items by set. If you’re looking for items in the helicarrier, say, for a mix, you can now easily see what’s there for the taking. Similarly, the WallaBee Museum now displays Colin’s hard work in a coherent manner. Again, we would like to remind our players that the Museum is, of course, a museum… you can look, but no touchy. 😉

As mentioned above, 2.1.5 is rolling out later today. Players will receive push notifications for earning achievements, even without updating to 2.1.5, but will be unable to see their own achievements until they update. This new system allows us to push out new achievements in the future without needing additional app updates, so they can become more often (similar to items).

Any additional questions, comments, concerns? Email: support@wallabeegame.com
If the App Store doesn’t show an update for you, please use the links above.